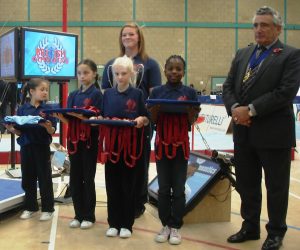 Catleaps has a strong volunteer programme for parents, coaches, gymnasts and other volunteers at events. Once you’ve joined the club you can sign up to help out! Gymnasts, parents and coaches from the club have volunteered at the Men’s British Championships, London Youth Games Gymnastics Finals, The London Open, London Schools Acro and Tumbling Finals, The London Festival of Gymnastics, many General Gymnastics and Women’s Artistic Regional Competitions, Schools National Finals and the East London Keysteps Finals. We have also volunteered at the Military Vehicle and Machines Show.

One of our favourite volunteering events so far was the Men’s Artistic Gymnastics British Championships, where we met Olympic bronze medallist Louis Smith, World Medallists Daniel Purvis and Daniel Keatings who were kind enough to have their photographs taken with our volunteers, sign autographs and accept some letters & drawings of appreciation from some of our younger volunteers! 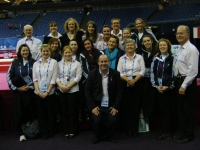 In 2009, six members of Catleaps were lucky enough to volunteer at the World Championships held at the 02 Arena. It was gymnastics heaven with Gymnastics Greats walking around the arena. Queen of the ‘Perfect TEN’ Nadia Comaneci 1976 All around Champion came into the warm up arena to meet us. 2008 Olympic Champion Nastia Liukin, 2004 Olympic Champion Alexei Nemov, Multiple World medallist with a 20 year+ career Oksana Chusovitina was coaching the German Women’s Team. 2012 was a big year for volunteering with the Olympics at our home city. The Visa Prepares Test Event was held in January 2012 at the North Greenwich Arena (formerly the 02) and was the final qualification for the GB Men’s team to qualify. They did this in emphatic style wining the team competition with a seven point lead to take their team place at the Olympics. During the 2012 Olympics, Catleaps were out in force helping run the Greatest Gymnastics Competition on earth!

As the Competition Director for the Men’s London Open which is now established as a National and International Artistic Gymnastics Competition, I can not speak highly enough of the volunteers from Catleaps. Every year they give up hours of unpaid time to come and work in key roles at the competition. Always with excellent attitude, attention to detail and a friendly smile.

It is these attributes that made me want them as part of the Games Maker volunteer programme for the London 2012 Olympics. They will fulfil crucial roles at the Olympics, and but knowing their past experience I have every confidence they will do a fab job. They are so ably led by Catherine Bates, and who herself has taken the gymnastics world by storm in the last 5 years with such energy that everyone from Catleaps feels inspired to follow in her footsteps. She is a key strategist within London Gymnastics and again her skill set was recognised and therefore she is a key member of the Gymnastics Leadership Team for the London 2012 Games.

Please visit our contact page for more details on how to get in touch with us.

Catleaps Gymnastics offer gymnastics lessons in Dagenham and Upminster, Essex for boys and girls from preschool through to teens. Our coaches hold enhanced DBS disclosures, and are trained through the British Gymnastics Coach Education Programme.